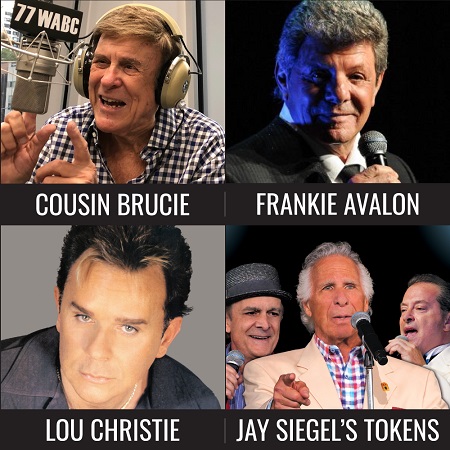 Join Cousin Brucie for this all star lineup with Frankie Avalon "Venus", Lou Christie "Lightning Strikes", and Jay Siegel's Tokens " The Lion Sleeps Tonight" as we stroll down memory lane!

Frankie Avalon: If you can’t remember a time when Frankie Avalon wasn’t a part of your life, you aren’t alone. This talented performer can look back on a career that spans three generations of music, television and motion pictures which he feels is due primarily to the loyalty and trust of his audience.

Lou Christie's first million selling song, THE GYPSY CRIED, transformed a local choirboy into a national teen idol, while he was still a teenager. Over the decade of the 1960's, Lou followed success with greater success. TWO FACES HAVE I was his next big hit featuring his stratospheric falsetto. LOU forever embedded himself and his uniquely talented voice into America's consciousness with his number 1 multi-million selling success LIGHTNING STRIKES. LOU'S chart topping success continued with two more million selling hits, RHAPSODY IN THE RAIN and I'M GONNA MAKE YOU MINE.

Jay Siegel's Tokens: In October 1961, they recorded what has become one of the biggest hit songs of all time, "The Lion Sleeps Tonight." That hit song is celebrating its 50th anniversary in 2011. One of the seminal songs of all times, it has enjoyed resurgence in multi-generational popularity thanks to its prominence in the long-running Broadway hit show, The Lion King.

Other major hits for The Tokens include, "He's in Town", "I Hear Trumpets Blow" and "Portrait of My Love".