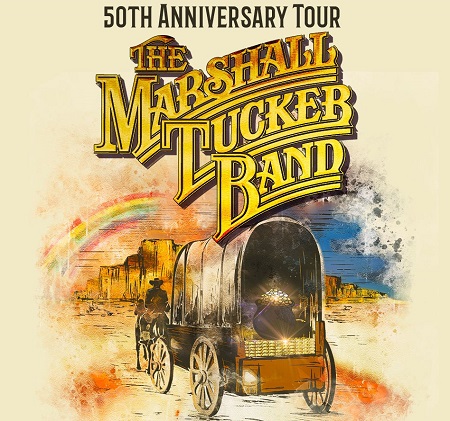 One of the major Southern rock bands of the ‘70s, the Marshall Tucker Band combined rock, country, and jazz, and a featured extended instrumental passages on which lead guitarist Toy Caldwell shone.

The band formed in Spartanburg, SC in 1971, performing for 50th years. Their peak came with the million-selling album Carolina Dreams and its Top 15 single “Heard It in a Love Song” in 1977. Led today by founding member and lead singer Doug Gray, the band represents a time and place in music that will never be duplicated. With hit singles like "Heard It In a Love Song," "Fire On The Mountain," "Can't You See," and "Take The Highway," The Marshall Tucker Band continues to be played on classic rock and country radio, and they have never stopped touring. Current members include acclaimed guitarist and vocalist Chris Hicks, the highly respected drummer B.B. Borden, multi-instrumentalist Marcus Henderson plays flute, saxophone and keyboards in addition to lead and background vocals. Ryan Ware plays bass guitar, with Rick Willis on lead guitar and vocals. Together they present a powerful stage presence as they continue to tour the country and continue to be a powerful force in the world of music.